Pontedera is the city of the Vespa, but also a real open-air museum with important works of contemporary art scattered throughout the city.

In this tour we will visit the open-air art places of Pontedera, to do this you can start with the “Centrum Sete Sóis Sete Luas, center for the Arts of the Mediterranean and the “Lusofono” world”, located in Viale Rinaldo Piaggio, 82, inaugurated in 2009 in a former Piaggio warehouse, it offers contemporary art exhibitions by artists from all over the world. Inside the center there is also an interesting “Studiolo” dedicated to the typical food and wine products of the Mediterranean countries participating in the project, as well as art books from each country, a world music archive and the permanent collection of works left as a gift by various artists who have passed through this cultural center. In the courtyard stands the “Passarola” monument, an Enlightenment symbol, a metaphor for dreams and utopian freedom in a Medieval Europe oppressed by an intolerant Inquisition. The fact was taken up and fictionalized by José Saramago in the work “Memoriale del Convento”, whose protagonists are two visionary dreamers: Baltazar Sete Sóis and Blimunda Sete Luas. The Sete Sóis Sete Luas Festival draws its name from the aforementioned characters and adopts the Passarola as a symbol for its evocative power: the Festival wants to make use of the ability to fly beyond the reality of our time. Built with recycled material by the Andalusian sculptor César Molina, the Passarola is a tribute to the Honorary President of the Festival and Nobel Prize for Literature, José Saramago.

Continuing to the left on Viale Piaggio you arrive at number 7 where the Piaggio Museum is located, here a stop is mandatory for those passing through Pontedera.
The Piaggio Museum was inaugurated in March 2000 in the premises of the former tooling workshop, one of the oldest and most fascinating buildings in the industrial complex of Pontedera, where the company established its production from the early 1920s. . The Museum was created to preserve and enhance the historical heritage of one of the oldest Italian companies and has the objective of reconstructing the history of Piaggio and its Territory. With more than 250 pieces on display, the Piaggio Museum is the largest and most complete Italian museum dedicated to two wheels and houses one-of-a-kind pieces that tell not only the history of the Piaggio Group and its brands, but also trace the history of mobility and industrial development. and social issues of the country.
Some models are real works of art: the Vespa autographed by Salvador Dalì, the mythological Vespa with alabaster parts by Mino Trafeli, the colored Vespa by Ugo Nespolo. Others are original and curious works such as the ecological Vespa decorated with butterflies, the “Vespa Mucca Pazza”, the “Vespa jeans” and many others. Its rooms house some precious pieces of pre-war railway and aeronautical production, the rich and admired Vespa collection, the collection of Piaggio two, three and four-wheeled products (Ape, Porter, mopeds) and the extraordinary collection of products linked to the most properly motorcycling and sports history of the Group brands: Aprilia, Gilera and Moto Guzzi. Alongside the space dedicated to the collections on permanent display, the Piaggio Museum dedicates 340 m² to temporary exhibitions that allow the structure to continuously vary the cultural offer, ranging from the field of art to that of technology, from scientific dissemination to fashion.

Leaving the museum and walking along Viale IV Novembre, you arrive at the Albereta Park, a green park where you can take a picnic break, cool down in the shade of the large pines and be enchanted by the beautiful paintings.

Edf Crew, in particular Umberto Staila, and Nico Lopez Burchi have represented a maxi graffiti along a part of the perimeter wall of the Park in which they have represented the various phases of man: from the spermatozoon, to the newborn having fun with toys, up to the teenager with a backpack on his shoulders, thrilled by the desire to know and learn. The life cycle ends with a roaring lion, accompanied by a quote: “Everything seemed great, unattainable. A long path for the construction of a unique, unrepeatable, your own, identity. Be the road of your dreams, be the lion in this story of yours called life”.

The second mural again by EDF crew is this time a fairy tale that has as its title “the wind and the prince” a sort of fairy tale in colored form where a prince, even if against the wind, leaves anyway to make his dreams come true.

After leaving the “fairytale” of the Albereta Park by taking the underpass in via della Stazione Vecchia, we find ourselves very close to the Muro di Baj in Via Risorgimento; The largest mosaic in Italy, the gigantic work (100m long and 3m high) inaugurated on 22 December 2006, separates Viale Risorgimento from the railway. In 2003 Baj sent the drawings to the mayor of what should have been his last great work, a mosaic dedicated to work. He died a few weeks later, at the age of 80. The polychromatic and multi-material collages, pervaded by a playful and ironic vein, through the unfolding of a long and varied frieze of human presences of mechanical allusion, represent the icon of the satirical vein of the Milanese artist who ironizes on the mechanical nature to which he risks to reduce man and the daily danger of robotic homologation that characterizes consumerism.

To see the wall in its entirety we must cross and move to Piazza Garibaldi where we find the stone Author’s Seats. The “Seats in stone” project, designed by the Sienese sculptor Mauro Berrettini, involved 16 of the most important Italian and foreign sculptors of contemporary art, so in a few meters you can compare yourself with the art and genius of Joe Tilson, Cordelia von den Steinen, Girolamo Ciulla, Pietro Cascella, Nado Canuti, Giò Pomodoro, Jean Paul Philippe, Rinaldo Bigi, Marcello Aitiani, Mirella Forlivesi, Yasuda Kan, Viliano Tarabella, Daniel Couvreur, Venturino Venturi, Mauro Berrettini, Daniel Milhaud and Manuele Giannetti , who transformed the bench, a passive and inanimate object into the protagonist, in order to bring the sculpture closer to people, creating objects to be used daily.

After a short relaxing break on the seats, we move to Piazza Martiri della Libertà better known by the “Pontaderesi” as “Piazzone”, from here we walk along Corso Matteotti, the shopping and social life center of Pontedera, here along the entire pedestrian path we find many works of ‘art. The Bull by Pietro Cascella in Piazza Curtatone, a sculpture in white Carrara marble, which wants to represent, with the bull bearing a boulder on its back, a clear symbol of the hard work. Also in Piazza Curtatone there is Palazzo Pretorio which today hosts art exhibitions and cultural events on the first floor, on the second floor the offices of the justice of the peace, with an audience hall and on the ground floor a room, born with the same philosophy of the cafes at the inside the museums of the big cities, it is organized on an area of ​​350 square meters, with glassed-in loggias, a vertical garden, and a fully open kitchen.

From here you can take a small detour through via Gotti and arrive in what is known as the “Piazza del Duomo” due to the presence of the Cathedral, it has had many names over the years, but since 1976 it is dedicated to the Fallen of the Acqui Division in Kefalonia and Corfu.
The Cathedral, in neoclassical style, was built between 1840 and 1864 on a project by the Florentine engineer Giuseppe Michelacci and consecrated in 1874. In 1948/49 it was partially rebuilt after the bombings of ’44. Inside, with three naves divided by paired columns with Corinthian capitals, on the two altars on the right there are a canvas depicting the Annunciation by Jacopo Chimenti known as Empoli and a Madonna and Child with Saints Teresa of Avila and Filippo Neri, called “della Mercede” or “della Neve” by the seventeenth-century Florentine painter Francesco Curradi.
In 1937/38 the Cathedral added two bell towers erected on the back, on the sides of the apse. They were mined in July 1944 and, falling, also ruined the church, which had already been bombed in January. In 1958, a new daring bell tower (53.60 meters high) was built based on a project by architect Renzo Bellucci. Twenty years later, a renovation work was needed which left it to the city in its current form.

On the west side of the square are the church and the medical and social areas of the Venerable Arciconfraternity of Mercy, founded around 1700, a well-known and appreciated institution of voluntary assistance. The “Chiesa della Misericordia” designed by the Pontederese architect Luigi Bellincioni, in a mixed style of Renaissance elements and nineteenth-century decorative taste, was begun in 1883 and finished in 1892. It has a central polylobed plan, with a hexagonal dome in terracotta ribs and lantern.

Turning your back to the church you can admire the fountain in travertine, stone and concrete (1931) which has become, in perspective with the facade of the Misericordia church or with that of the Duomo, one of the symbolic images of the city. The lower tanks have an octagonal base, while the two upper ones are circular, supported by a pillar modeled in the shape of dolphins.

Returning to Corso Matteotti via Via Lotti you return to the heart of the city, within the perimeter of the old and disappeared medieval walls.
Proceeding on the right side you will come across Palazzo Stefanelli, a work from the early 19th century, raised on four floors, seat of the Municipality from the mid-19th century, then Palazzo del Podestà, now the Town Hall, has an interesting italian collection of paintings of the second half of the 20th century, scattered throughout the various interiors.

Also in Piazza Cavour, in 2002, a beautiful bronze sculpture was placed, the work of Giuliano Vangi, “Girl standing” which represents a young woman in the act of moving, leaning forward with her hair and clothes in the wind, clear symbol of freedom; it has become the symbol of the journey of many women.

Continuing, we arrive in Piazza Andrea da Pontedera opened in 1903, since then, for the real “Pontederesi” the square continues to be called Piazza Belfiore as it was actually called before 1936, when it was named after Andrea da Pontedera.
In 1934, the bronze sculpture depicting Andrea da Pontedera, a fourteenth-century sculptor, a native of the city, was placed in the center of the square and has become one of the symbolic images of the city. The square has been recently renovated (2009), with a new pavement and with the benches of the illustrious contemporary artist Canuti, and with the sculptures of Simon Benetton, his sculptures fire, iron, strength, form, highlight the union and contrast between the concreteness of the material and the marvelous lightness of the metal sheets shaped by the blowtorch.
The new square is a place of aggregation, play, meetings and conversation.

Continuing towards Piazza della Stazione, passing via 1 ° Maggio, you will come across the mural “The human revolution“, once again signed by EDF Crew, which has given a new face to the former Ipsia Pacinotti. The artists imagined a gigantic Don Quixote, an errant knight of the imagination who, together with his faithful squire Sancho Panza, breaks the earthly chessboard of violence and social injustice and protects with his spear a bubble of air and new life, represented by the sprout of Montsechia Vidali, the first plant to appear on earth in version 2.0. The “Human Revolution” is a message of inclusion and relationship.

Continuing we arrive in Piazza Unità d’Italia, here we can admire the sculpture “Vespa Origin” by Mino Trafeli, a symbol of the combination of the artist’s creativity and the dynamism of a particular mechanical product. Trafeli researches the myth and the anthropological dimension of human work. 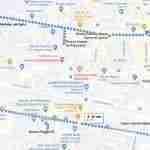 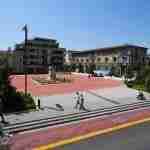 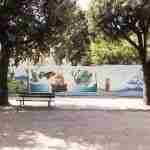 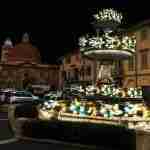 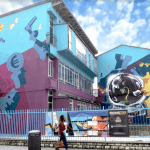