The village of Rivalto is one of those places where time seems to have magically stopped. Rivalto, in fact, has its origins in the Middle Ages, being born as a fortified fortress: very little remains of it today since the inhabited area over the centuries has gone to occupy just the part of the ruins of the manor, but the original features seem to have been kept visible above all in the buildings of the historic center.
In addition to the beautiful houses with exposed bricks and churches sometimes immersed in the surrounding woods and clearings, the village offers breathtaking views of hills and plains, ranging from Pisa to Volterra, and from where it is possible to see, on clear days, also the sea.

After having tasted the particularity of this place which has remained extraneous to the frenzy of the cities, it is possible to take the path that leads to the Sanctuary of the Madonna del Carmine, about ten minutes from the town center: this sanctuary was built and it is still immersed in a small clearing surrounded by typical Tuscan cypresses.
Rivalto is also the village of “marroni”, different from chestnuts for the sweetest and strongest flavor and for their size, and for this reason it is not uncommon to find centuries-old chestnut forests around the village which the “marrone” plant has been grafted. 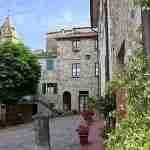 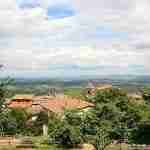