Near Via della Fonte, the remains of the 18th-century old mills have recently been unearthed. The Path of the Mills, also returned to light after a long reclamation, excavation and restoration work, can be followed following the San Donato stream: this path highlights the agricultural nature which, yesterday as today, is the driving force behind the municipality of Chianni.

Until the mid-1800s, travelers who wanted to arrive in Chianni from the lower Valdera were almost obliged to follow a narrow road that descended from Rivalto to the San Donato stream, where a small bridge – perhaps of medieval origin – allowed to enter the town.

As in many other centers in central Italy, one or more sources were found to welcome travelers, which served not only to quench foreigners, but also to the women of the country, who went to get water with the classic jugs rigorously brought over the head.

Of the two sources present until the middle of the 19th century, only the source of the “Pescaia” remains intact and clearly visible; it still retains the classic brick arch and the original side vents.
Today the source of the Pescaia is no longer active, but remains a suggestive garden thanks to the rich vegetation near the S. Donato stream, which makes this small park an oasis of refreshment from the summer heat, ideal for spending time with children.

The park is also available for civil weddings.

Near the fishing source, on the S. Donato stream, the remains of some buildings are visible, used as oil mills and mills.
In 2014 a group of volunteers began the restoration of architectural remains, bringing to light a historical heritage, buried by vegetation and bricks.

To ensure optimal performance for their hydraulic mills, the Rasponi – Spinelli Counts, who had purchased most of the Chianner territory, decided – between the end of the 18th and the beginning of the 19th century to revive the depressed economy of the area. Together with the construction of streets, new farmhouses, sources and what was necessary for the farm, it was decided to build two new structures in the initial part of the San Donato stream. To date, only four mills remain more or less visible, often in precarious conditions but such as to still give us a rather clear idea of ​​their structure and functioning.

Along the Path of the Mills (Via della Fonte) a hypogeum from probable Etruscan times has been brought to light. In general, the Hypogeum is an underground construction built entirely by man often as a readjustment of natural cavities. The Etruscan hypogeum of Chianni is currently composed of an environment of about mt. 2X9 inside a rocky wall, which ends in 2 niches with profiled quays, a larger central one and a smaller one on the right side; to close the complex there is an ancient iron door restored by a local artisan company. 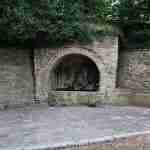 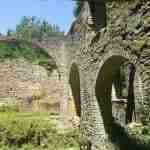 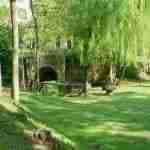